Lessons from the darkness and Neapolitan instrumental music Caresana. Scarlatti, Veneziano / album tracks “Notturno” is the first record of the Flying Squad of the Queen. This is the result of several years of work focusing on Italian music from the late XVII century. From research and collection of musical scores to their interpretation, this record is the achievement of a dedicated team. The Flying Squad of the Queen chose to record this particular repertoire (Caresana, S

This progam is articulated around two oratorios with the same name: Maddaleni ai piedi di Cristi, the Magdalene at the feet of Christ. This well-known biblical tale was set to music by two composers both born in the same year in northern Italy. Giovanni Bononcini (1670-1747) composed his oratorio in 1690 and Antonio Caldara (1670-1736) composed his own around 1697-1698. Caldara proposed a new version of his oratorio in 1713, the only version to have survived until present day

From Stabat to the Miserere

Bach and the Neapolitan Tilge, Höchster, meine Sünden BWV 1083 J.S. Bach Tilge, Höchster, meine Sünden, BWV 1083 and instrumental pieces from Durante, Porpora and Scarlatti. During his stay at the Court of Weimar from 1708 to 1717, Bach composed the majority of his work for the organ. At this time, he also discovered Italian music and Vivaldi’s concerti in particular. Bach worked closely on the concerti and created several transpositions including his arrangement of Vivald

From Stabat to the Miserere 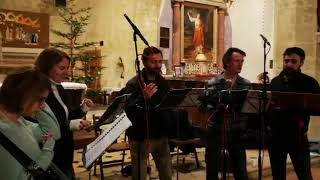 The true lovers of italian music